To Wong Fu Thanks For Everything Julie Newmar 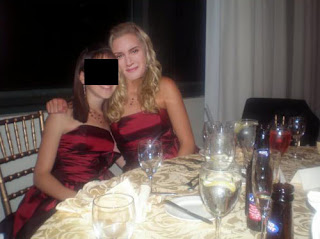 We've had to watch about every drag movie from Some Like It Hot to Tootsie to Wong Fu. I thought that the wedding reminded me a lot of To Wong Fu. The reason is that we were so nervous that at the reception, we sort of became the party. I don't know exactly how many of the guest new we were guys and how many didn't, and a wedding that's got a large contingent of hair stylists isn't going to be the most anti-crossdressing crowd out there, but there were aunts and grandmas and uncles who met us and were at ease and fascinated. I guess having Colleen on my arm made me less self-conscious than the others in frocks.

One of the best parts of the wedding events for me was meeting Wendy's sister Jackie. Jackie is a high school student and at first I know Wendy had worries about how she would interact with us, but I think she was more interested in the fact we were in college than the fact we were in heels. She was just so enthusiastic and interested about everything. I think I was the dancing queen of the wedding. I danced with at least a dozen people of all ages, sizes, and genders.

Somebody asked me when the date for my release was coming up. After all, I started this only about 4 months after Jill. I have no illusions. That day is not coming for me as long as I date Colleen. If we break up, I'll probably get more freedom, but I really hope that doesn't happen. Knock on wood, we're doing great.
read more
Newer Posts Older Posts Home
Subscribe to: Posts (Atom)