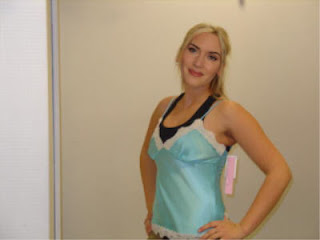 It seems that some ideas that came out of one of the blogs, may be making things tough. They've told us that as soon as they get the rules set and find a way to make it fair for Amber, they will be putting us through a series of sissy contests. Colleen has talked about taking me on a double date with her and 2 guys so she could watch me squirm. Things are getting tough I have to admit. I'm exhausted now after a long day of shopping and a night of modeling new and old outfits. I may have a line on a job. I will tell you all about it later.
read more 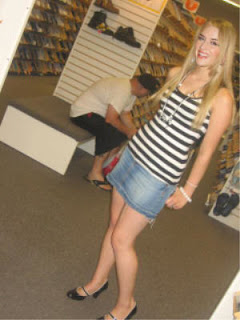 I'm sorry that I have been so late in posting. It's been rather hectic and unfortunately, while I do have computer access at home, as you might imagine posting to the blog is definitely something that I wanted to do in private. Wendy was true to her word and my parents weren't overly concerned by my looks.

Colleen and Kristine have moved on down here and are attempting to do a blog together. They won't make any promises on how often it'll be updated, but they are going to try. I've already been warned that if Colleen posts twice before I post once, I will be spending a day hogtied or suitably punished in another way.

Hello, Be Prepared to Hate Me 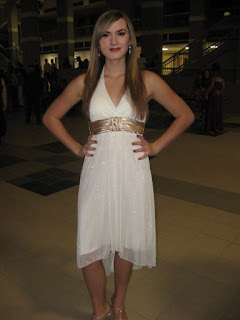 Be prepared to hate me, but I wanted to introduce myself. I'm Colleen and I am both Jill's sister and Cindy's Mistress. I don't know if I'll set up my own blog. It kind of appeals to me, but I am already starting to worry about the time commitments. I am so excited about college that I don't want to waste the time sitting over a computer typing. We'll see.

I love Cindy and dating her is definitely something I was never prepared for, but by trial and error I think I've figure out how to be a stern mistress and a loving girlfriend at the same time. It is so much fun!!

I enjoy sharing her with you, but just remember this is my kink and not your fantasy. If you think I'm too mean or too nice, I'm sorry, but that's my prerogative. I'm going to do things to Cindy you won't like--nothing permanent, but she's my toy and I will play with her. I'm not going to break her though. I love her too much.

I also am an important part of Jill's life. This past week, I outed Jill kind of to our mom and to a lesser degree to our dad. My parents are actually really cool and Jill's experimentation isn't really that big an issue. Jill had reached a part where she couldn't hide how feminine she had become and I didn't want that causing her to avoid our mom and dad. At first she thought I was the biggest bitch for doing it, but she thanked me later. Mom and dad don't know everything, but they do know she's experimenting with crossdressing. I'll let her tell you the rest. They know she's dating Kristine so they don't think she's gay, but then again they really wouldn't care as long as she was happy.

I had her model some of my mom's old 80s clothes for her and her wedding dress. Dad didn't see that part, which may have been too much too soon, but mom though Jill was really cute and said she Jill looks like one of my aunt's.

That's it for now. I hope you don't hate me too much now. I promise you Cindy's in good hands and in good handcuffs too. Yee-haw!!
read more
Newer Posts Older Posts Home
Subscribe to: Posts (Atom)