0 comments
Today marks my fourth day in a row of posting; this after another self-induced funk that caused an all-too-frequent hiatus from these pages.  So, this is quite an accomplishment.

Saturday turned out to be a rather wonderful and important day for me.  i wrote that Diane had gone into Her office and was likely to hook up with her lover Paul while there.  i was correct.  Little did i know that She was planning to involve me in her little tryst that day.

Diane's offices are closed on weekends and given the location of Her office, Paul's office and the nature of what they do, they can easily gauge when there will be no likelihood whatsoever of anyone showing up unannounced.  Also, their personal offices lock with no one else having the keys.

Two hours after She had left i received a text message from Her to call Her.  i wondered why She hadn't just called me and as soon as She answered, it dawned on me that Paul was right there in the office with Her when i called.

"Hi honey" She said in her sweetest voice and condescending tone.  "What are you up to?  Did you get all the errands done i asked you to do?"

i told Her what i had done and what i was planning on doing for the rest of the day.

"You're such a sweetheart.  I shouldn't be that much longer, maybe an hour.  I'm really getting a lot done, and feeling really good about it" She said almost giddily.

i wasn't 100% sure that Paul was there because i didn't hear him, but i just knew it.  Diane verified it later.

The one-sided exchange excited me.  The thought of Diane and Paul embracing and messing around in Her office while she paused temporarily to tease me over the phone (without him knowing) kept me aroused all afternoon.

i couldn't wait for Diane to get home, knowing that She wanted me to look pretty and that i was going to get a spanking for failure to capitalize a pronoun in an earlier post here.

i wore a flowered little girls dress with yellow ruffled panties, the bloomer square dance type panty, ankle socks and white mary jane shoes, and waited for her to arrive.

She commented on how pretty i looked and marched me upstairs to the master bedroom and told me to lean over the edge of the bed while she pulled my panty down.  She lifted the skirt portion of the dress to reveal my smooth buttocks and used a pillow to hold the dress down so that it would fall back over my bottom.

The spanking was a long one.  Diane used one of my old leather belts.  "A man's belt, something a 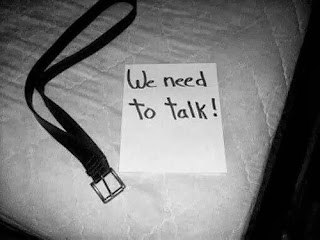 Her teasing continued.  She referred to Paul several times, talking about their fooling around in Her office and how many orgasms She enjoyed.  "I had three big orgasms, and several smaller ones.  Here's the proof" She said as she removed her panties and put them up against my face.

"I'll bet you wish Paul was spanking you don't You?" She asked me.

She was right, and it old her that yes, i did wish that.

She cuddled me after and we talked for what was the longest we've talked in a very long time.

i admitted to Her that i had lied to Her.  She gave me a funny look and asked me to explain.

"Before i said that i wished Paul was spanking me.  Well, that is a fantasy but it's really not my wish.  i'm glad it was You who spanked me and not someone else."

0 comments
Many sissies have fantasies of being outed, put on display in front of others while wearing the most extreme sissy clothing possible.  It's about the effect that humiliation has on them.  i'm not a psychiatrist so i can't explain it.  But i know the feeling.

Here are a few sissy outfits that i think fall into that category.  When i see these, i can't help but think about being made to wear something like this in front of my Wife Diane's girlfriends or Her Lover Paul... 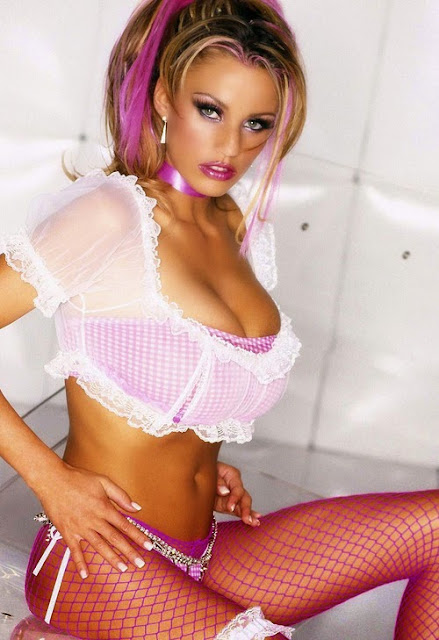 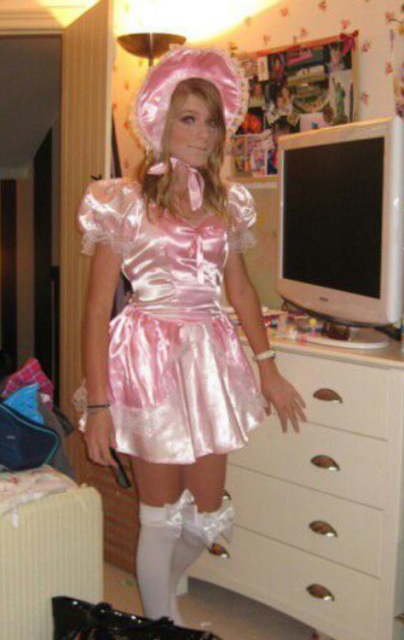 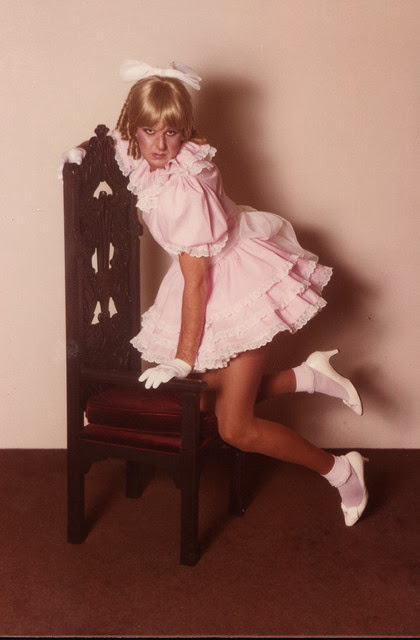 Which is your favorite?

If you have any "extreme sissy" outfits that you'd like me to show here, just send me an email and i'll be glad to share.  No nudity please.

0 comments
Diane went into the office today, even though it's closed.  She had a busy week and says She has to catch up on things.  She could easily catch up on those things here.  i wouldn't be a distraction.  I'm sure part ofHher "catching up" might include a visit from Paul.

She understand the funk i am in and is helping me get and stay out of it but under Her terms.

"Be looking pretty for me when I get back this afternoon.  I'll call you" She told me  She also added that She owed me a spanking.  i asked Her what i did wrong.

"I read your blog post last night.  Did you forget the rules about capitalization?" She said.

i told her i hadn't but had probably made a mistake.

She left without a comment.  It was a small exchange but one that made me feel like i was getting back into Her life, O/our life.  What i did, or didn't do, mattered to Her.  i felt ignored, insignificant but at the same time important.  Sounds crazy but that's how i felt.

i'd put on simple white cotton panties today.  Nothing fancy but they make me feel feminine and like a housewife. 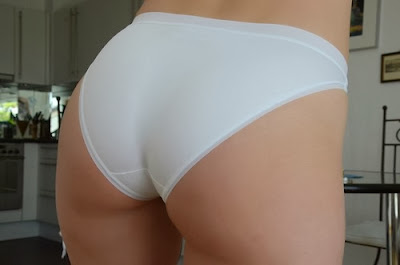 But now i know that i'll have to change into something prettier for my spanking, and that makes me feel as good as i have in a long time!
love,
sissy terri
read more

0 comments
i'm slowly coming out of my funk and will post more details soon.

i realize that so many of the things i fantasized about four or five years ago have come to fruition and i'm not happy.  i seem to want more and i feel like an ungrateful and selfish submissive.

i also feel that my submission to Diane is something so routine now that She takes it for granted.

i haven't seen Jake in a few weeks and that's also put me in a down mood.

i wonder why i require so much attention?

My tumblr blog has been very active however.  It's been an outlet to express my femininity in a somewhat non-sexual fashion.

Thanks to those of you who have left comments, written me here or on tumblr.  Your kindess and thoughtfulness help very much. 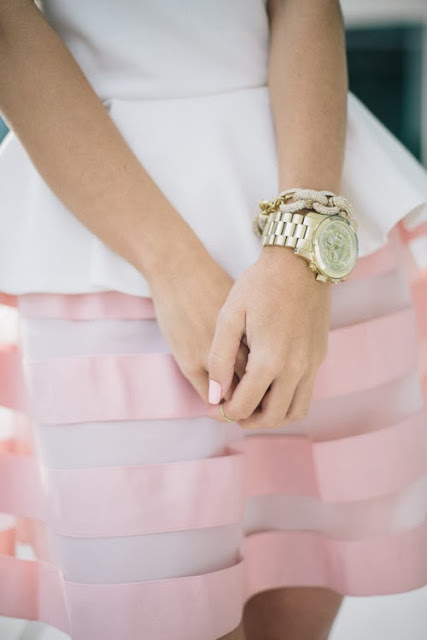 0 comments
i haven't posted in awhile because i'm having a difficult time dealing with the changes that are taking place in my relationship with Diane.  Because of that, i have a hard time putting my feelings into words.  Eventually i will but right now i can't.

On the "home front", Diane has become much more dominant and demanding.  That's been coupled with a reduction in the amount of sex she demands from me.  i worship her on demand but not as often as i once did.

She also wasted little time in becoming involved with Paul, her new lover.  i'm being cuckolded, but not involved in any way in their fun.  Diane doesn't see my involvement changing.  She's happy to enjoy Paul just the way it's going on now. 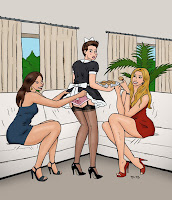 Diane's also shared details of our relationship with her best friend Linda, whom she trusts deeply.  Last week, Linda saw me dressed in a maids uniform as i served the two of them lunch.  It was set up as a display of Diane's dominance over me.  It was something i had fantasized about for so long, yet had a difficult time accepting it when it finally happened.

i haven't seen Jake since the last time i wrote about it.  He's been traveling on business and it seems as though his interest in me has wanted.  i opened up to him the last time we were together that i would like him to be more dominant, even suggesting that i craved for a "Dom Daddy" type.  Perhaps that scared him away.

So that's where i am right now.  You can probably sense my feelings, even though i haven't really tried to expound on them here.

i'm just in a funk, experiencing what it means to be a real submissive.